It’s happening again. The Banksy work removed from a wall in north London and whisked to Miami is back in London. But not returned to the community from which is was taken. Oh, no. The art vultures continue to exploit ‘Slave Labour’. 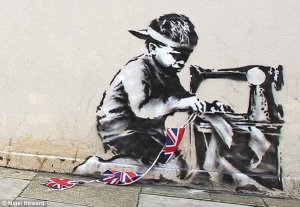 You’ve seen it before. You’ll not see it again. Banksy’s ‘Slave Labour’

This past weekend news outlets carried a headline that the Banksy work ‘Slave Labour’, which was removed from a wall in north London and offered for auction in Miami had suddenly popped up for sale in London.

The original sale was halted at the last moment amid much public outcry . What kind of chutzpah could enable someone to march into the city from which the work was removed and try to flog it back?

Well, the news outlets got it wrong. The work is coming to London but is not for sale. But the real story is no more cheerful and continues in the venality that has characterized the saga so far.

‘Slave Labour’ is apparently returning to London as the centerpiece of a one-off show and sale put on by Sincura Group who are terribly excited by the event. “It is only through The Sincura Group’s unique network that this coup was made possible, everyone was trying to find the true story of the pieces [sic] whereabouts and we were the only company to do so,” they tell us in a press release.

Far from being shy or embarrassed about the controversy over the provenance of this artwork, Sincura are flaunting it. This is from their announcement of the show and sale:

“The Banksy mural ‘Slave Labour’  that mysteriously disappeared  from a north London wall amid wild speculation and intrigue returns to the capital as the centrepiece [sic] of The Sincura Group’s latest private art exhibition and sale.” 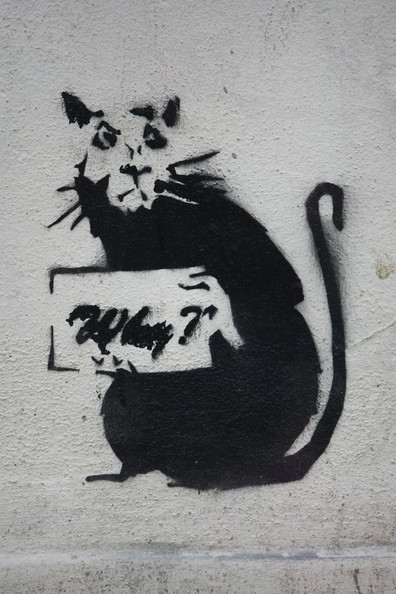 The show’s organizers are enjoying the rebel cachet of dealing with cred street art: “For an artist who has become synonymous with changing the look of our streets we present his work in the capital’s former flower cellars, now the stunning London Film Museum, in the heart of Covent Garden.” [sic to the whole sentence] without joining up their thoughts to the realization that once prized off a wall and quarantined in a gallery, it is no longer street art. What the hell? C’mon feel the noise!

While ‘Slave Labour’ is apparently not under the hammer (it’s already been under the chisel), a number of works by Banksy and other artists are. ‘Slave Labour’ attracts publicity, which draws in the punters and rakes in the dosh. And is then shipped back to the lair of a private collector in the US. “…where it will form an integral part of an important private collection of Banksy street works.” Private street art?

There’s no such thing as bad publicity so as soon as the press got hold of the story, Sincura put out a press release that is, by design or incompetence, both contemptuous and provocative.

According to this release, Sincura are acting out of only altruism: “… our event will be the first and only time that it will be shown in the United Kingdom before being returned to the United States …” A cheerful statement that completely ignores the fact the work was originally on a wall in Wood Green for everyone to see whenever they wanted without having to pay.

Furthermore, “…we simply wish to display it in again its home city before it disappears forever.”

Actually, the London art show and sale is not open to the public. It’s a closed affair. 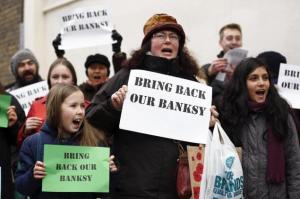 The opinion of the people of Weed Green is being sought and heeded.

If you come down from N22 and ask to see your bit of art before it’s taken away again, you won’t get in unless you are a Sincura member.  Membership is accessibly priced at £95 per month for standard membership, £250 per month for “Chrome Membership”.

Adding more sick to the bucket, the release states, “The Sincura Group are making no financial gain from displaying this piece of art.”

Oh, and the event is sponsored by Veuve Clicquot, who’ll be dishing out the bubbly.

This exclusive exhibition and money grab is on June 2nd at The Flower Cellars, 4-6 Russell Street, Covent Garden, London  WC2B 7PR, starting at 6pm.

Interested parties could stop by on June 2nd and say goodbye to their bit of community art on its way back out of the country. They won’t be let in but one can press one’s face or whatever against the window and say hello to the Sincura and their guests as they put the vulture in culture.

Author of the novels Another Perfect Day in ****ing Paradise, Sanctioned, Weed, King of the Undies World, The Underpants Tree, and the story collection Un-Tall Tales. Editor, freelance writer, occasional cartoonist, graphic designer, and all that stuff. At heart he is a London person, but the rest of his body is in long-term exile in Osaka, Japan.
View all posts by chrispagefiction →
This entry was posted in art and tagged appropriation, Banksy, Sincura, street art. Bookmark the permalink.