Banksy and the greedheads

Posted on February 23, 2013 by chrispagefiction 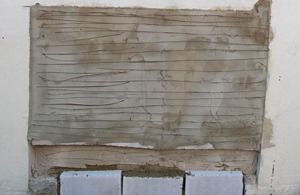 It strikes me as a story emblematic of these solipsistic, grasping times. An item of street art, Banksy’s ‘Slave Labour’ mural, is prised off the wall of a Poundland in London and spirited away by persons unknown to be auctioned (today) in Miami.

The story has been well covered by a number of sources and if you’ve missed it you can catch up with it in the Grauniad here and here.

It’s not quite the same as private enterprises being bailed out by taxpayer’s money and precipitating a culture of ‘austerity’ across the world, which is in turn a cover for enforcing neo-liberal policies on  unwilling populations. But the story does involve people with money appropriating something from the public realm for the sake of personal profit. Eventually, Banksy’s mural will show up in an art book or commercial gallery where the public will be asked to pay to see what once was on their own street.

Street art is all about context: the situation of the piece, and in this case the bigger collision of ideas.

The mural first appeared on the wall of Poundland, a thrift shop. The mural is a satire, referencing exploitation by capital. Despite its critical nature — or because of it — the mural becomes an object of pride in the community. A very un-street art plastic cover is placed over it to keep it safe. The object is then appropriated by the object of the satire, capital, and is offered to other representatives of capital at a price, £500,ooo, that is equivalent to a small house in the area from which it was removed.

Appropriation: on their website FAAM have imposed their logo on Banksy’s image, which was, ironically, photographed in situ.

The people of Haringey, the borough in which the mural was painted, are reported as being well pissed off (see everywhere) and a local politician has joined in a campaign to put pressure on the auctioneer Fine Art Auctions Miami to halt the sale, a campaign which is supported by people across London and apparently around the world. Meanwhile the auctioneer, Frederic Thut, feels aggrieved that people feel aggrieved at his role in the story and is adamant that reason and the people of Haringey can go fuck themselves; he’s grabbing his slice. You can read about that here.

The identity of the individuals who removed the art from the wall and offered it for sale is a mystery. Given that FAAM insist that the sale is entirely legal, it suggests that the removal of the art was either initiated or sanctioned by the owners of the wall.

The owners of the wall are not Poundland: they rent the building in which the store is located.

We know this because blogger Tom Pride of Pride’s Purge took the trouble to look them up, and you can see his post here.

The silence from the artist himself has been eloquent. What else could he say but ‘Innit’?

Banksy’s silence might also be because he feels he has already commented — specifically in May 2012 when ‘Slave Labour’ first went up. In a statement put out by his publicist, he said:

Graffiti art has a hard enough life as it is  –  with council workers wanting to remove it and kids wanting to draw moustaches on it, before you add hedgefund managers wanting to chop it out and hang it over the fireplace.

For the sake of keeping all street art where it belongs I’d encourage people not to buy anything by anybody unless it was created for sale in the first place.

Perhaps Banksy’s silence has not been absolute. According to the Haringey Independent, a Banksy-style rat appeared next to the blank space left by ‘Slave Labour’. You can read that story here.

The rat is asking a one-word question: ‘Why?’

Post script: The sale of the mural is scheduled for today, Feb 23. Not to be done out of expressing my own outrage, I have written to FAAM. The text of my message and the address of the contact form is below. Anyone interested is welcome to copy the text and add it to the slew of mail FAAM is receiving.

Aside to the post script: Talking of appropriation I note that FAAM has stuck its own logo on Banksy’s work, photographed, in situ where it is supposed to be. Fuckheads.

Where to send email to FAAM.

While selling the Banksy mural ‘Slave Labour’ may not be illegal, it is certainly unethical and unfair.
FAAM has participated in removing art freely given to a community to create profit for a small number of people outside that community.
Arguments by FAAM that the removal and sale of this art is about preservation are voided by the fact of the sale and the exchange of money for profit.
Preservation would be an act of altruism, not opportunism.
The actions of the seller and FAAM show a complete lack of understanding of or regard for street art, which belongs in its original setting. It shows a greater lack of regard for people.
It is not too late to halt the sale.

Author of the novels Another Perfect Day in ****ing Paradise, Sanctioned, Weed, King of the Undies World, The Underpants Tree, and the story collection Un-Tall Tales. Editor, freelance writer, occasional cartoonist, graphic designer, and all that stuff. At heart he is a London person, but the rest of his body is in long-term exile in Osaka, Japan.
View all posts by chrispagefiction →
This entry was posted in iniquity and tagged Banksy, FAAM, Wood Green. Bookmark the permalink.