Posted on November 11, 2012 by chrispagefiction

And so a fine time was had at the Japan Writers Conference.
Vikas Swarup read an extract from his new novel, The Accidental Apprentice, which will be published early-ish next year. He then took questions, and I was again compelled to marvel at the guy’s humour and erudition. The chat turned to VS Naipal, which elicited from Mr. Swarup a couple of marvellous put downs of Naipal. On Naipal’s representations of India in his work: ‘There are many kinds of Indian. Mr. Naipal is the kind that left India and moved to Trinidad.’ However, it is the nature of Mr Swarup’s discourse that the put downs sounded utterly good natured at the same time as being utterly emphatic. I am sure that had Mr Naipal been there, he would have beamed quite happily.
Actually, thinking of Mr Naipal’s reputation he would immediately have initiated an indefinite feud.
Later in the day I spent some diverting time chatting with Eric Johnston of The Japan Times and John Einarson of Kyoto Journal, and I mention that not as idle chitter, but because I want to plug their latest project: Fresh Currents. 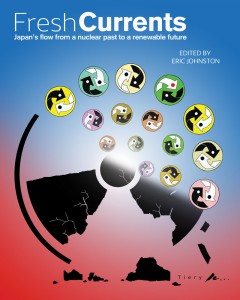 Fresh Currents is a book, a collection of articles and essays (in English) about Japan’s energy future, an issue that has increased in urgency and relevance since the Fukushima disaster. The book is about Japan, but the concerns — nuclear power, renewables, fossil fuels, consumption — are global.
The book looks fantastic (design by John Einarson and Eldwen Laurenzi) and is a provoking read (edited by Eric Johnston).
This very evening, the Fresh Currents crew are having a party for the book at Tadg’s in Kyoto, and I would love to be there but for a cold that sneaked up on me today. Apologies to all for not mentioning the Tadg’s event sooner.
So there you go: Fresh Currents, Japan Writers and a jolly, literary time.

Author of the novels Another Perfect Day in ****ing Paradise, Sanctioned, Weed, King of the Undies World, The Underpants Tree, and the story collection Un-Tall Tales. Editor, freelance writer, occasional cartoonist, graphic designer, and all that stuff. At heart he is a London person, but the rest of his body is in long-term exile in Osaka, Japan.
View all posts by chrispagefiction →
This entry was posted in events and tagged Fresh Currents, Japan Writers Conference, Vikas Swarup. Bookmark the permalink.