An Etonian wank fest: those Cummings and goings on

Posted on September 5, 2019 by chrispagefiction

Of course, what we all want now is for Dominic Cummings to be caught in flagrante in a sex-death act so bizarre and depraved that it’s details, immediately leaked to the world, will smother the Tory cabinet in reflected slime and bring the whole lot down, chased out of the House in tar and fetish underpants.

Of course, that’s not going to happen.

Scummings has the means of keeping his peccadilloes on the leash — a black leather, leash studded with the teeth of missing children. He will have only the rarest silk restraints and bespoke butt plugs, protected with superior safe words crafted by masters of the dark arts in Saville Row. He has the means to copy his personality and project it deep into the most crepuscular depths of the dark web to please himself in immaculate privacy with homunculi and pigs, in which the screams of the shaved hamsters will resonate chillingly, but from which they will never escape.

Safer still, he will have access to the most secure bunker for his kind ever devised, the editorial offices of the Daily Telegraph, where he can indulge himself in front of the whole newsdesk in the sure knowledge that no word will be breathed other than in the hacks’ own fevered masturbatory fantasies, which, as of today, might include rubber chickens.

Buy shares in Kleenex now. You heard it here first.

No, Cummings is still with us, his secrets more or less locked down. What we have to console ourselves with is the spectacle of Johnson and his cabal floundering in their plan for national Dominic-ation.

It would be folly to believe that Johnson’s three defeats in two days this week and the loss of his parliamentary majority, and the lack of filibuster by his men in the Lords, spell the end for his campaign. It is however, hard to shake the feeling that we are witnessing the Machiavellian merchants of slime finding themselves on the back foot after their call for a general election was rejected.

Has the opposition ever rejected an election before? Well, it’s happened to Johnson and Cummings.

But we can be sure they have a Scumming plan, and it sure ain’t over until the fat bastard has left the House.

While plan A may have been stalled by hiccups, there will be plans B through Z, with a few contingencies besides, that involve poisoning the whole population.

Schemes and plans are what Cummings is, and without dissembling and duplicity, he simply wouldn’t be.

We would do well to remember that the main plank of the Johnson-Cummings strategy (or should I say the Cummings-Cummings strategy) is the trashing of order, of procedure, of his own party, of parliament, of democracy, of sense and reason itself, and perhaps of his own partner’s living room, to get his way; to force an election on a population made so paranoid, disoriented, and panicked, that they would vote for Conan the Barbarian if they thought he could slay the scary beasts — but what they are more likely to get is Onan the Old Etonian with his dripping handkerchief. 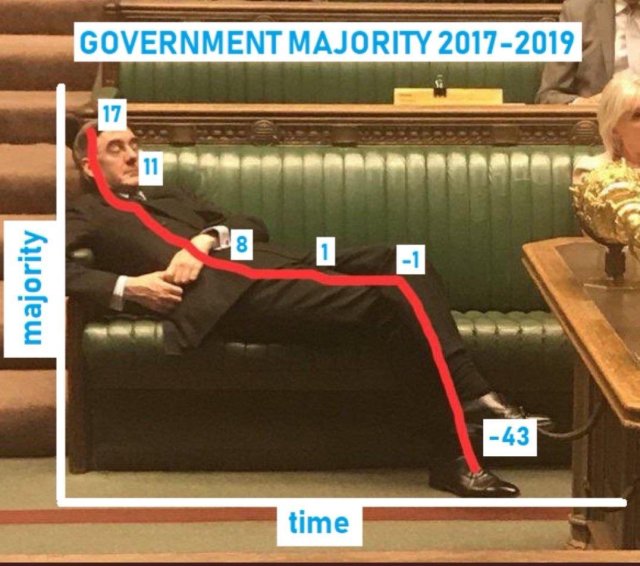 Author of the novels Another Perfect Day in ****ing Paradise, Sanctioned, Weed, King of the Undies World, The Underpants Tree, and the story collection Un-Tall Tales. Editor, freelance writer, occasional cartoonist, graphic designer, and all that stuff. At heart he is a London person, but the rest of his body is in long-term exile in Osaka, Japan.
View all posts by chrispagefiction →
This entry was posted in politics and tagged BorisJohnson, Brexit, DominicCummings, satire. Bookmark the permalink.