So, has someone been posting stuff on social media without checking its authenticity? 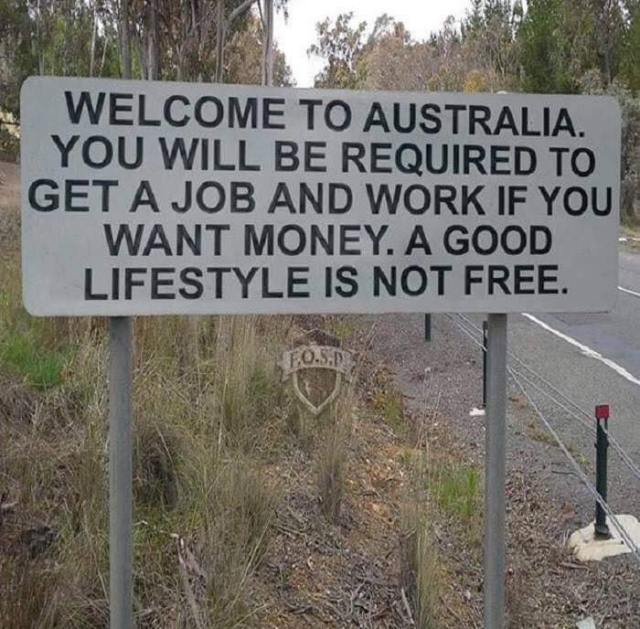 This ominous ‘Welcome to Australia’ image has been doing the rounds on social media, posted and liked by people I would normally consider to be humane and intelligent, who clearly feel — though none of them are actually Australian — that the message has something to say that resonates with them.

One problem here: this photograph isn’t real. The photo isn’t real and the issue behind it isn’t real.

The fact that the ‘sign’ for migrants is posted on a country road in Australia, a nation that has no land borders, probably ought to set those critical thinking bells ringing.

The posters might also have asked themselves why the Australian government would put up such an inflammatory sign at all, let alone on a country backroad. Not very governmental, is it.

Yes, the image is a Photoshop job. No such sign was ever made by the Australian government.

The image was apparently created and disseminated by an Australian race hate outfit called Freedom of Speech Productions (you can see their logo imposed on the picture), which is associated with the Australian Tea Party (still no alarm bells ringing with the people who posted it?)

It’s a shoddy fake too. The quality of the graphics (the perspective is off, too many full stops and there’s a general realism issue) tells you that this was cobbled together by a chap who is disabled by an awful skin disease in between desperate wanks over some not-quite-legal site.

Clearly the image taps into the myth that there are hordes of people coming over ‘here’ (insert name your country) to sponge off ordinaryhardworkingpeopleeveverywhere, and bring the state to its financial knees, steal the gold from your grandmother’s teeth, etc., etc.

Not only are they not a millstone on the necks of ordinaryhardworkingpeopleeveverywhere, they just are not.

The scrounging hordes were made up by the tabloids and UKIP and the right wing. Funny how we didn’t hear about that study in the Telegraph, the Mail, the Sun, the Express, the BBC, etc.

Reality check: you can’t claim benefits in the UK if you are not British or an EU citizen. Simple as. Even simpler than that, you can’t claim benefits in the UK even if you are a UK citizen if you are not ordinarily resident in the country. Yes, I know that arcane little nugget because I am a UK citizen not ordinarily resident in the UK. The fact that I actually pay (albeit modest) taxes in the country is irrelevant to the bureaucracy. I don’t live there, so fuck off me!

Still more basic than all that, my children — kids of a UK citizen — cannot use NHS services without paying because they have non-EU passports. Yes, I found that out the hard way too when one got sick on a trip to Britain.

So, if non-resident Brits can’t use Britain’s health and welfare services, what chance does a random scrounger from Foreignstan have?

All this talk of sponging, freeloading, scrounging hordes from other countries is bollocks. Absolute bollocks. And then more bollocks. It is the absolute Platonic form of bollocks for fuck’s sake. It’s all as real as the fake sign.

Of course people admitted as refugees will get limited state support. But it is very small, as is the numbers of people — small handfuls — admitted to the country is minute and will have no discernible impact on the economy (except to contribute to it when they start working).

If we want to talk about freeloaders — and there is a conversation to be had about freeloaders — perhaps we could start with tax avoiders. Google, Starbucks, Amazon, are foreigners who do come over here cap in hand and then pay little or no tax on business done within the UK. Look at the recent deal done between the Conservative government and Google, which let the company off something like 80 per cent of its tax bill. Imagine if you or I went to the tax man and said I don’t feel like paying all this, so let’s do a deal.’ Yes, we’d end up in prison.

While the UK admits fewer than 20,000 refugees per year, most of whom will work for a living, tax avoidance by big companies comes to £120 billion per year. Which do you think is the bigger problem?

So welcome to your reality check. If you want to be taken seriously check your facts. Credibility is not free.

Author of the novels Another Perfect Day in ****ing Paradise, Sanctioned, Weed, King of the Undies World, The Underpants Tree, and the story collection Un-Tall Tales. Editor, freelance writer, occasional cartoonist, graphic designer, and all that stuff. At heart he is a London person, but the rest of his body is in long-term exile in Osaka, Japan.
View all posts by chrispagefiction →
This entry was posted in politics and tagged bollocks, hate groups, migration, refugees. Bookmark the permalink.