Posted on October 17, 2015 by chrispagefiction

Author of Weed, King of the Undies World, and The Undperpants Tree, Chris Page isn’t an award winning novelist. He hasn’t won the Booker or the Nobel prize for literature or anything else. The sock puppet interviewed him to find out how much of this has to do with the books he has written.

Sock Puppet: So what’s all this about underpants, then? What kind of subject is that for serious literature?

Chris Page: Underpants? Literary trope, unifying theme, leitmotif; also being fundamental to human life they are a universal in the human condition, a foundation of civilisation, you might say. They are also crucial for catching the drips.

CP: Have you actually seen any underpants?

SP: And right there in the first chapters of the book you have the ravishing Victoria Gousset changing out of her microscopic bikini into even smaller panties, and doing it repeatedly in front of the hunk she’s trying to bed.

CP: Oh. Is it that obvious?

SP: Gossamer is a word that comes to mind.

SP: When is the Nobel Prize coming to you?

CP: When the judges get past the panties.

SP: But it’s not just about underwear is it, King of the Undies World.

SP: But the underpants are the best bit aren’t they.

SP: But mainly the pants.

CP: But the satire, you know and —

SP: And there’s a sequel too isn’t there.

SP: The Underpants Tree. You wrote a sequel to a story that was all about underpants.

SP: Of all the things you could have written about in the world, in the infinity of human experience, you chose to write about underpants.

SP: To make a grand total of two novels entirely about underpants, in case anyone is missing the point.

SP: And there’s a third volume in the works.

CP: As we’ve said, not entirely about underpants. One character in The Underpants Tree actually smokes a pipe.

SP: Smokes a pipe when surrounded by all those underpants? That’s a fire hazard isn’t it?

CP: I didn’t think of that. I don’t want to get the books withdrawn. Come to think of it there are two zombie apocalypses too. Do you think the health and safety people might have opinions about that too?

SP: Not if you don’t tell them.

CP: So that’s 130 to 140,000 words of underpants jokes, with a third volume planned. You’d think there was a Nobel in just that. Never mind the literary merit.

SP: You would think.

CP: Otherwise, it simply wouldn’t be a just universe.

SP: Who knows? Maybe we’ll find out the Nobel committee gave Henry Kissinger the peace prize for the secret bombing of Cambodia or something.

CP: Now that could never happen.

SP: Weed was your first novel.

SP: And subpoenaed it too. Underpants and weeds: do you actually want anyone to read your stuff?

CP: Who has ever read a Nobel prize winner? This makes me a clear contender.

SP: Fair dos. So how would you describe Weed to anyone who hadn’t read it?

CP: It has a predominantly white cover with a big green smiley face kind of peeking at you from the corner of the front.

SP: Sounds to me it might be about a bloke who doesn’t fit in with the whole facile mess of consumerism, salaried labour and asinine popular culture, who has a vision of life that transcends our market-made quotidian banality and who is persecuted as a result, until there is some kind of transformative event that brings the corporate edifice down, and which is a magical and surreal gesture of universal contempt, and that the whole story is very funny at the same time.

CP: Very perceptive of you. Can I go now?

SP: But does Weed feature underpants?

SP: A reason to go on. So you’re working on the next installment of pants jokes.

SP: So, you’re working on the next instalment of pants jokes.

CP: No, next I’m taking a diversion into the world of social and political satire, murder, dismemberment, and the Daily Mail.

SP: Sounds like a rib tickler, I must say. Better get a truss before I read that. And when will this one be out?

SP: Pants, weeds, flaky deadlines — why should I not be reaching for a copy of something by Dan Brown or EL James right now?

CP: Because your hands are nailed to your ears.

SP: So this blood-soaked satire is what you’re working on right now.

CP: No, right now I’m having conversations in my head.

SP: Hadn’t you better stop doing that and get on with something useful?

CP: Brilliant! Now that’s why you’re a sock puppet and I’m not.

SP: OK. Let’s find out. On the count of three, click the upload button and we’ll see which one of us disappears. 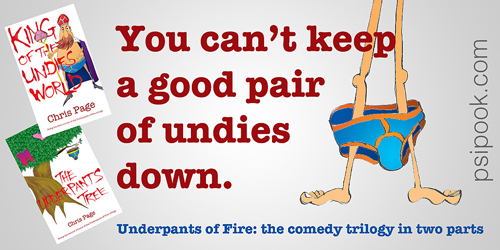 Author of the novels Another Perfect Day in ****ing Paradise, Sanctioned, Weed, King of the Undies World, The Underpants Tree, and the story collection Un-Tall Tales. Editor, freelance writer, occasional cartoonist, graphic designer, and all that stuff. At heart he is a London person, but the rest of his body is in long-term exile in Osaka, Japan.
View all posts by chrispagefiction →
This entry was posted in fiction and tagged #humorousfiction, Chris Page author, King of the Undies World, satire, sock puppet, The Underpants Tree, Weed. Bookmark the permalink.